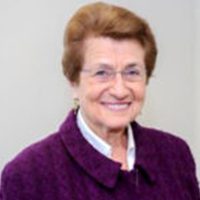 Cora Weiss has devoted her life to the movements for civil rights, human rights, women’s equality and peace. She is the UN representative of the International Peace Bureau, the President of the Hague Appeal for Peace which promotes peace education and is Honorary Patron of CTAUN, the Committee on Teaching About the United Nations.

Cora is the Chair of the Board of DCTV, Downtown Community Television, which offers training in all aspects of videography to young people from NYC’s high schools and colleges.

A national leader of Women Strike for Peace, she and others launched the Jeannette Rankin Brigade which called for an end to poverty and racism at home and to the war in Vietnam. She co-chaired the Committee of Liaison with Servicemen Detained in Vietnam which arranged for the monthly delivery of mail to POW’s and their families, unique in wartime. She established the International Committee of Peace Action.

She ran the Reverse the Arms Race peace program of The Riverside Church which helped organize the antinuclear march of million people in Central Park in June 1982. She joined in drafting the unanimously adopted Security Council Resolution 1325 on Women Peace and Security calling for the Prevention of violent conflict, Participation of women at all levels of governance and Protection of women and girls.

She wants to leave her children and grandchildren in a world at peace with justice.