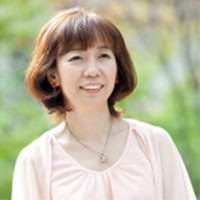 Based in Osaka-Japan, and starting off as a fashion designer, she became a professional aroma therapist and began teaching aroma therapy. After various experiences in her life, she happened to get inspired to produce a film so as to fill the universe with gratitude and that being her mission in life. She did everything such as shooting, interview, editing video, writing a song for the ending song and singing it herself to create the film. The title is “The Miracle of the Gifted Quarter – Life’s Truth revealed”, which contains many scenes in which Katsuko Yamamoto, a teacher at a special-needs school, communicates with students.

Within two years after the completion of the film, it spread abroad with English subtitles. And a hundred and twenty thousands people watched it by the end of 2011. It was invited to the Japan Film Festival in Los Angeles and received a standing ovation at a screening in Columbia University, which is the summit of video technique.

She completed the second film “The Miracle of the Colored Light” in 2008, and also completed the third film “A Great Blessing” in 2011. On the same yer she also appeared on a Murakami Kazuo film “Switch” by Suzuki Naoki.

On the National Human Rights Day in 2013, “The Miracle of the Gifted Quarter” got played at the headquarters of the United Nations in New York.
In total, the film has been played at 1800 places in 18 different countries and has reached 180,000 viewers.

Now she runs workshops all over the world on what she developed, “Hesodo”