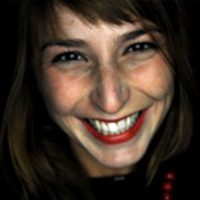 Nita Deda, is the Head of Communication of the International and Short Film Festival DokuFest, held every year in Prizren, Kosovo. In addition she is the producer of the film ‘BASHK”, directed by Daniel Mulloy and starring Arta Dobroshi. Among other projects she worked as the project manager of the art festival SURF, as the editor of the video booth section of Kosovo 2.0 website, as one of the organizers of TEDxPrishtina and as the Communication Coordinator of the first Pavilion of the Republic of Kosovo at the 55th Venice Biennale of Art. She also works at the National Gallery of Kosovo where she coordinates the annual program and exhibition for the Artist of Tomorrow Award and as a coordinator for international projects.